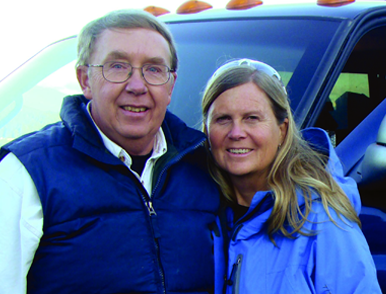 HighCountry Ice Solutions equipment addresses a shortage of spray unit offerings in the anti-icing and deicing market with three models of pickup based liquid spray systems, a UTV system, and a walk behind sidewalk spreader. These are complete systems with nothing further to buy for the truck side of the process. All systems utilize industry standard components for simple repairs and long life in a design proven in testing since 2003. HighCountry units are becoming the choice for contractors getting started in anti-icing or needing a smaller rig for tight quarters.

Scott started snowplowing in Durango Colorado his senior year in college. The year was 1974. Scott was engaged that spring to Carolyn Davis (nickname now Cari) that next spring and moved to Denver. They were married in October of 1975 and took the plow truck on their honeymoon trip. Scott plowed in south Denver and Summit county until 1981. Scott & Cari moved back to Denver when their first child was born, and started snowplowing in the Lakewood area specializing in churches and small businesses . In 1992 they took their 4 children and moved to Bailey, Colorado in the foothills south west of Denver. The business was exclusively family run for the next 10 years focusing on small businesses in Conifer. The children were raised shoveling and graduated to plow trucks when they hit driving age. The business grew slowly as children started driving. Then Scott & Cari joined the Snow & Ice Management Association (SIMA) in 2001. That enlarged their vision of what could be and they began using sub- contractors from their church to take on more work. Family was still the core of the business and the team subs were part of the family.

In March 2003 the great blizzard hit crippling Conifer with over 5 ft of snow most places, and up to 7 feet in others. Scott had to use loaders to dig out their customers and learned some very valuable lessons. With the counsel of some SIMA members from upstate New York, they developed the areas first written catastrophic blizzard plan which has been incorporated into all commercial contracts since.

A year later, March 29, 2004, Scott & Cari’s middle two children, Josh (age 20) and Beth (age 17) were killed together in a motorcycle accident not far from their home. The whole community rallied behind them and helped get them through the early stages of grief. Their faith in Jesus Christ was tested to the max, and held strong by God’s grace.

In the fall of 2006 things started to shape up for another banner year of snowfall. October had over 30 inches and the Care Enterprises team was stretched. But the blizzard plan was working. Right after Christmas disaster struck again with the death of their youngest son Chris at the age of 17 on December 27th. The next day a huge blizzard hit and dumped over 40 inches on Conifer. Scott saw through his grief and got extra help from other SIMA member companies from other parts of Colorado. A team took over the business with the extra help from SIMA friends and the Zorno family retreated to Dillon for the week. Their church found relief drivers and extra loader operators as the snow continued to build up. The year finished with over 320 inches of snow. Scott literally crawled out of a snowplow truck in May and onto an airplane with Cari for a needed Florida vacation provided by some church friends in Breckenridge. Again their faith was tried & tested but found to be even stronger.

Scott & Cari are staying in the Bailey/Conifer area. This is where their friends are and family is nearby, including their adult daughter. They have become active in grief ministry at their church. Cari speaks at women’s retreats and blogs regularly. Scott continues to speak at SIMA events and has become one of the organizations respected contributors.