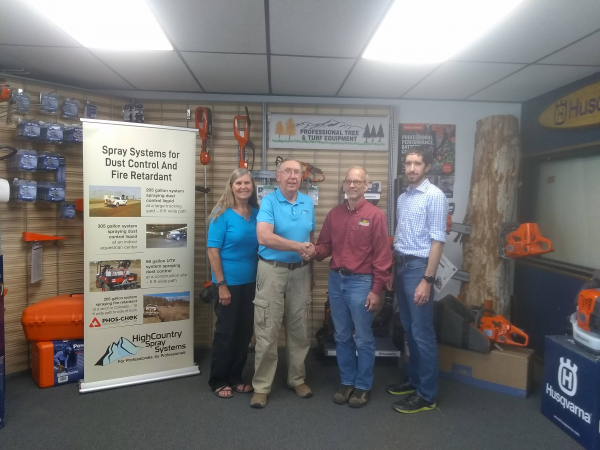 HighCountry Ice Solutions LLC, parent company to HighCountry Spray Systems, is pleased to announce the retirement of its founder and COO Scott Zorno, along with his wife Cari Zorno, CEO.

The reins of HighCountry will be handed off to Craig McLaughlin, owner and president of Professional Tree and Turf Equipment (PTTE) of Arvada, Colorado. PTTE has been the sole source manufacturer of HighCountry sprayers since the company’s inception more than nine years ago.

PTTE will continue to produce HighCountry’s current product line of quality, reliable anti-icing and deicing spray systems from 5 to 450 gallons. HighCountry has become the choice for snow and ice contractors getting started in anti-icing. “Having Craig and the PTTE crew bring HighCountry under their umbrella is a logical step that protects product integrity,” Scott says.

Scott and Cari will retire to Hot Springs, South Dakota; but Scott will remain as a technical consultant with HighCountry and will be available for individual consulting in the use of liquids. Scott and Cari will represent HighCountry at SIMA’s Snow & Ice Symposium in Cleveland (August 17-20) and the APWA Western Snow & Ice Conference in Loveland, Colorado (September 29-October 1, 2021). They look forward to seeing industry friends to share well wishes as they head off into retirement.

For more information on HighCountry products, visit www.highcountryis.com or call 720-673-0177.

ABOUT THE ZORNOS: Scott Zorno has been an industry leader and advocate of liquid anti-icing since 2000. He has spoken on the subject at many industry events and authored or provided technical input to SIMA’s Snow Business magazine and several industry forums. He stepped away from his own snow contracting business, with much of it in a 120-inch per year market, after more than 40 years. Cari Zorno has been a plow driver, crew leader, office manager, and spray truck driver for multiple years. She has been active at trade shows designing and staffing the HighCountry booths.